Cathedral of the Theotokos, Vilnius 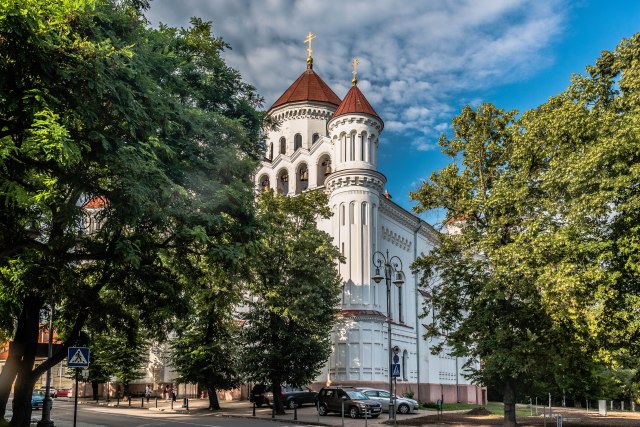 The Orthodox Cathedral of the Theotokos in Vilnius. Originally built by architects from Kievan Rus’ in 1346-8, commissioned by Grand Duke Algirdas for his Orthodox wife, Uliana of Tver. From 1609, it was used by Eastern Rite Catholics until it was abandoned after a major fire in 1748. It was reconstructed in 1785 only be wrecked nine years later by the Russian army in the Kościuszko Uprising.

In 1808, a local prelate sold the neglected building to the Vilnius University. After that, the building hosted an anatomical theatre, library and other university facilities for half a century.

The old cathedral was confiscated and transferred to the Russian Orthodox Church during the mid-19th Century Russification campaign in Poland and Lithuania. The Russian architect Nikolai Chagin was responsible for its reconstruction from 1865 until 1868 in a style imitating medieval Georgian architecture. The cathedral was damaged during the Second World War but was restored in 1948-57. Today the cathedral belongs to the Russian Orthodox Church and was once again renovated in 1998. Its services are attended mostly by members of the ethnic Russian and Belarusian communities of Vilnius.